Visit: Friday night, and it was PUMPING!

To Note: Go early or book if you want a seat, this could get messy...

Scores
Ambiance 5/5
Design 4/5
Drinks 5/5
Staff 5/5
Extra LBC star: * Of course, that's for GM Lee
I arrived about quarter past six on a Friday and nabbed the last two bar stools though a group looked like they had been enconsed in the back for hours and couples would like the booths that run down the wall as you enter and look out on the action. It did get busier as the night went on, being lent over on occasion to place orders, but the bar men are incredibly on the ball with keeping everyone happy and drinking. 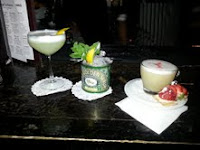 I started with an Aviation, made with Bombay Dry I was delighted to see and a delicious, fresh cherry was a nice touch. I also had a little bowl of the honey nad mustard sausages and I cannot recommend the food enough! Like Callooh Callay, there is some serious work going on in the kitchen and the pairings are well wroth checking out from sliders to popcorn. Then when my friend arrived and ordered a Pina Colada, a drink I avoid at all costs, I had to take a sip and found it balanced really nicely (as well as a big tasty garnish). We moved onto some more classics (of The LCC) but the smokiness of the Bacon and Eggs (a favourite of mine) was too much for her so I took over and passed over a daiquari type drink that was made for me and which she promptly ordered again!

I finished on an Earl Grey Martini served with a strawberry topped custard cream on the side of the tea cup. Another triumph, that's all I can say.


Fabulous team behind the bar. Awesome music. It took all i had to drag myself away for dinner. At 9pm.