Presenting... Aspall Cyder at The Grove 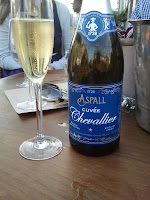 We have all heard of wine parings, perhaps you’ve even been to a cocktail and food event. However last night a compact group of locals gathered to enjoy a rather unique event, Aspall Cyder pairing dinner. Now cider is about the only thing I will not order but the other half is a fan and I am always looking to learn so here is how it panned out.

Arrival drink: Aspall Cuvee Chevallier (the name of the family who started Aspall’s back in 1728 and still run it today) served from a champagne style bottle in flutes. Your mind says “Champagne” but the palate says “cider”, which is weird. Nice and light. 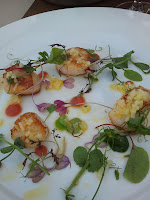 Scallops with Aspall Lady Jennifer: named after the grandmother who added apple juice or water to her glass to “keep up with the boys”, the additional apple juice means this is a lighter 4% offering and has a nice spritz. Works very well with the seafood (which was delicious, love the edible flowers)

Duck with Aspall 2012 Imperial: bit of a beast at 8.2% and a darker colour but this comes from the addition of Demerera sugar. I liked the first few sips but then it became…cider. One to try though! The confit 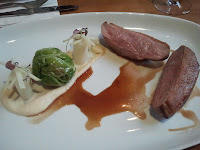 duck leg that unravelled from the cabbage was a huge hit!

Apple and Rosemary Tarte Tatin (with apple jellies, sorbet and crisps) with Aspall Perronelle’s Blush (added Blackberry Juice): what can I say, this blew me away. Not the cider but the dessert, delicious  and the chef gave us the recipe! The cider was a little lacklustre against the previous, I would have enjoyed drinking more of the Imperial with this. However it was suggested that you can use this as a cassis so top up with the Cuvee. 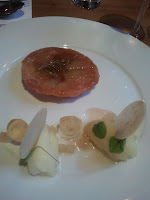 So what did I learn? Well a lot about cider, the (actual) difference between White Lightening and “proper” cider beyond quality. A lot about a family owned business with a lot of success. I met the lovely Nathan of Aspall (thanks!) and now have a very valid alternative to Champagne which some friends – for some reason – do not enjoy.

(But as a Champagne Academy alumni I’ll stick to the real fizz for the mo!)

Youngs are running several events with Aspall throughout the summer and I urge you to go and learn and taste and then spread the word yourself. The specialties are available in some Waitrose, Sainsburys but it never hurts to ask your local to stock something you want. #quackingcyder seems to be the twitter tag to follow, @nathansloane or @youngspubs or @aspall 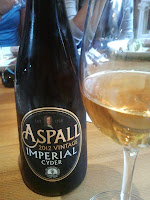 And thanks to The Grove (who I wrote about just before!) for great food and hospitality 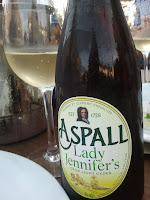 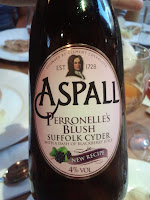 I was lucky enough at the Hampton Court Foodies Festival to attend the beer masterclass run by someone I have followed on Twitter for a while – Melissa Cole, Somm-ale-ier. And following my recent post on great pubs in my area I wanted to follow with a little piece on beer itself.

Did you know there are over 1000 breweries in the UK, and 43 of those are in London?

I learnt was that larger is a German word meaning “to store” or mature – and cheap larger, you know who I mean, cuts this maturing phase out of production leaving a cheaper, less tasty beer.

Then I learnt that ale uses a different yeast which works faster and at higher temperature for a fuller beer and with a little bit more sweetness.

Also, gypsum rich water, such as you find at Burton on Trent, is best to make pale ales.

But most importantly what did we drink (lost my notes, from memory!):

Brains Boilermaker (Penderyn whisky cask finished) IPA 6.5% - not such a favourite but maybe 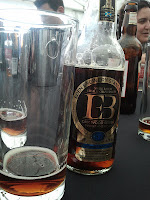 that is also a reflection of a big brewery trying to "do craft"!

Eden Brewery (Bourbon Cask Finish) - all you need to know is THIS St Andrew's brewery blew me away, it tasted just like milk chocolate. In fact it was so good I went and bought an Islay finish and a rum cask finish too but the bourbon has to be my favourite- match made in heaven.

Pubs in Clapham: a mecca for "kicking it"!

Beer. I love it. In a job where cocktail bar visits are a must, the joy of an anonymous pint at your local cannot be underestimated. And in my area I am spoilt for choice. Also, although I know this does not extends cross all my “trade” friends, if you are interested in different tastes in spirits and wines this tends to cover beer too.

My love for beer started, as silly as this is, when I moved to London. Unfortunately despite the brewing talent in Scotland the offerings in pubs extend to Stella and Guiness only. So it is a delight to live near three fab pubs: The Nightingale, The Avalon and The Grove.

Yes, it is a Young’s Pub but they also have a whole range of Meantime, both on tap and bottled. In my time I have tried everything from IPAs to Porters and the highlight is always Tuesday pie night when artisan pies are served with yummy fresh veg and paired to beers – genius.

When I first walked past the pub I was a little afraid it was your standard “old man pub”. You know the type, when you feel like the pub might grow very quiet as you timidly push open the door. But that is not at all true as this tardis manages to encourage a friendly prop-up-the-bar area at the front where I have enjoyed friendly banter with the old timers, darts at the back, tables out front for smokers and a huge garden at the back as well as a fire for when the nights draw in. Winner all round with a brilliant land lord and dogs welcome (to my other half’s delight).

The Avalon   http://www.theavalonlondon.com/
Part of the Renaissance Pub Group these guys offer a more upmarket option, especially when 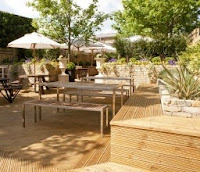 it comes to dining. Another space of extraordinary size, there is a front, side and back garden; all are huge. The front half of the pub has the traditional sweeping oak bar with sport regularly shown, the back extends into an upmarket dining space, worth looking out for website deals and taste card offers as it can get pricey, gastro-pub style. They think out their wine list well and the beers cover the basics, with a specially brewed offering now to celebrate their 10 years.

Although the crowd can be a little…boating shoes and chinos at dawn kind of thing… it is friendly and a great Saturday night alternative to a big night out as it never feels empty here but there are enough couches, to go with the Victoria cornicing and high ceilings, to tuck yourself away if you want.

Fast becoming a favourite I am afraid to say, despite the outdoor space around the edge of the

building seemingly developed in a wind tunnel so perhaps more Autumn onwards! This pub offers everything from film clubs to sport on the big screens, cookery classes and very good food better priced than the above. Spirits are not the main attraction but the beers are and especially their experiments with unfiltered beers, straight from large casks at the bar (Meantime again).

The lay out is also brilliant with smaller tables at the front (and another curved oak bar) leading to areas separated by draped materials and filled with couches, perfect for larger groups and often accompanied by children, then the bright back area is mainly set aside for dining with a kind of “kitchen table” too but it makes a great viewing area too. Free popcorn during their film if it helps.

Clapham – it may not be pushing the boundaries of cocktails, but to kick back with a beer there is nowhere better.
Posted by Bar Hopper at 02:56 No comments: