I was first introduced to this vodka, unlike the majority of people, by someone other than owner/maker/marketer Pleurat. It was a friend and restaurant manager who said I had to try a martini with Konik’s Tail. It was good but we’d already had a bit of gin by then and didn't  think of it again. A few months later Pleurat rocks up to Selfridges Wine Shop, pulls out a table and starts offering tastings at the door. He certainly confused the other exhibitors who had waited months for their slot! 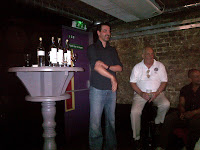 everywhere. So almost 2 years after I first tried Konik’s Tail I was delighted to join Paul of Bespoke and Tonic to hear Pleurat tell his story officially. And what a story it was.

We were taken on a journey from his arrival in the UK in 1994, his first job at an Angus Steakhouse and apartment shared with his fellow pot washers to his move into bar tending and from there an –unexplained – dip in fortunes before he recreated himself, offered his expertise (on our sweeter Western palates) to some bigger vodka brands and was soon judging at competitions internationally all the while developing his own product ideas.

The result – 17 yers later Konik’s Tail was born. It seems that nothing was left to chance with dozens of waters tasted at every point along the water source for minerals, hard/soft levels and, like Martin Millers Gin, keeping it alive instead of stripping it of this character.

Pleurat told us that he spent 2 months living in each of the 6 grain fields in a tent – and through tasting the grains at every time of day and night in all weather – ended up choosing spelt, rye and wheat. These are distilled separately then blended. 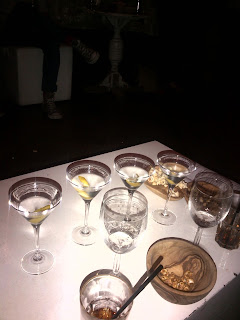 Then it was the turn of the distilling process, tasting the consistency of all the brands he wanted to work with then negotiating to set up his production in a small part of their distillery. 250 trips to Poland later and 4 and ½ years Konik’s Tail was bottled and tested on the UK market, individual by individual until the recipe was declared perfect. Now there are 4,000 bottles made per batch.

So to the tasting – first pour some in your glass, swill and throw on the floor. We were in a basement with a low ceiling, it got messy. Then, like whisky, take a mouthful and chew, get it everywhere and then enjoy.

Next came dry martinis and then a cocktail with pepper, avocado and cucumber.

And the verdict: I started my passion for spirits with vodka on a night out in Leeds almost a decade ago. Since then, I have rather fallen out of love with the product, and enjoy the smoothness of potato products over anything else. I can certainly see the quality and interest in this vodka, with a spicy rye finish and very clean palate but with a round mouth feel too. Drink it over the rocks with a twist of lemon. Anything else and use another brand.

I cannot help but be drawn in by the passion. And there is nothing wrong with that. Pleurat has worked tirelessly to get where he is now and I think that alone deserves a toast for fighting back against the big boys. Cheers.
Posted by Bar Hopper at 03:14 1 comment: